As you know, I often skip around the timelines of my illustrious dating life to talk about some of my experiences when I feel most capable of explaining every detail. Lately, I’ve been in a deep funk of frustration and it seems that no one on the other end of my Wifi can figure out how to keep a conversation going…if they are capable of even starting one. It has come to the point that when someone messages me and says, “What kind of dog do you have?” as their introduction, my go-to answer is now “Oh, he’s a Go f*ck yourself… EVER HEAR OF THAT breed!!!??” I know…it’s mean…but look what I have to deal with:

Check out this sultry intro:

Everyone say “hi” to Larry and take comfort in the fact that my snarky responses are not just on this blog.

Then there’s…Mister Mr. Oh, you did read that correctly. I enjoyed this guy’s inflated ego almost as much as his screen name. Unfortunately, I think the irony goes unnoticed by him. It also pains me to think that he had to steal jokes from everyone under the sun to put together his uninspired bio: 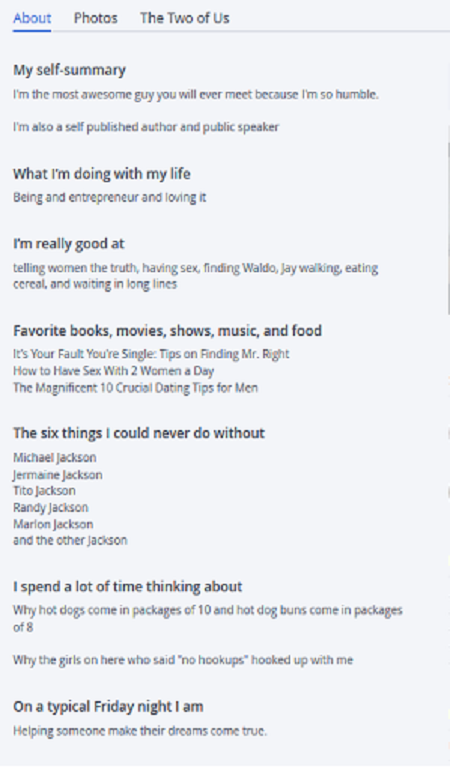 The hot dog reference is from one of the best scenes of “Father of the Bride” and needs to remain there. He also messed up the numbers of hot dogs and buns in the joke, but I’m not really surprised about that. I hope you know what I mean. It’s like when a crappy cover band performs one of your favorite songs of all time and does it horribly. Don’t mess with classic feature film comedy, dude.

So, as I was thinking fondly about the actual movie (“Who’s George Banks?!?”), Mister Mr noticed that I checked out said bio and sent me this “message”:

Oh yeah…totally making it happen. I don’t know how he’d fit me into his busy schedule of “having sex” and “finding Waldo.” I bet he does make it happen with some women who think he’s a charming, direct New Yorker, and those women have even less of a clue than I do. That’s why I don’t feel guilty about telling you he’s a comedic thief.

I hope you, my fair readers, at least remember the amazing 80s band by an almost identical name: Mr. Mister. They created this work of genius:

“Broken Wings” stuck in your head now? Good, it is a classic. You are welcome.

2 thoughts on “What Planet do you Live On? Part 4 – Interesting Ways of Reaching Out”