As I believe I alluded to in my first post, there have been a number of experiences I have had with the opposite sex that have (shockingly) never involved the Internet.

I was a guest at a good friend’s wedding a few years back. There were well over 200 people there, the music was great and the alcohol was flowing in all directions. And when I say that, I mean that there were at least 3 bars set up around the reception area where it seemed that at least one dozen guys and gals (but mostly guys) were standing and festively barreling into each other.

A slave to tradition, it came time for the bride to toss the bouquet. I tried to avoid the situation completely, and ran in the opposite direction of the female gang eagerly holding their arms up to try and catch some airborne floral. Not only did I not make it away from the group with any sort of grace, but the bouquet hit me right in the face and then fell to the floor. Horrified but not wanting to ruin the moment, I picked up the flowers and awaited the next step to this wondrous routine.

Next up was the equally-unnerving garter toss. To make it clear, I’m well aware that when you get a group of males together to perform any sort of task, especially when there is alcohol involved, it gets competitive. However, I have never witnessed anything more ruthless than the struggle that ensued among those who wanted to catch this little piece of ruffly elastic. It was definitely the effects of gallons of whisky and testosterone that caused a group of close to 100 men to literally run and jump on top of one another, breaking several glasses, causing children to cry and everyone to wonder who would need the E.R. It certainly had nothing to do with me sitting on a chair close by, waiting to do my part and have the garter delicately placed on my appendage.
After the clawing and tackling was over, there was not much left but tons of broken glass and…him. The dude who caught the garter was not only disheveled, but didn’t look like he could walk too well and had a bloody nose. No, I’m not kidding.

In the wedding photo archives, there are definitely a few photos of my smiling, yet completely horror-struck face as I awaited my fate – bride and groom standing next to me for support. 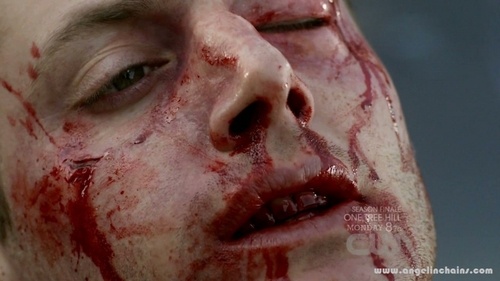 Somehow he managed to crouch down at my leg and do the business. With zero eye contact (poor guy probably couldn’t focus on much), blood slowly trickling from his nostril, he spoke these enchanted words to me:

The garter was on, there were definitely enough photos taken of these precious moments and it was time for this boy to get some gauze. I was done.

It was somewhat of a challenge to start having regular exchanges with Jay via okcupid.com. After we had introduced ourselves, there was maybe one more message between the two of us and then I didn’t hear back from him for about two months. When I had assumed that he had simply moved on to brighter pastures, he explained that he was having some health issues and apologized for disappearing. He seemed like a good guy with a solid personality and sense of humor. I liked his attractive face and shaved head in all of his well-displayed photos. At the time, he lived very close to where my apartment was, and actually had a good job and a car, which I liked as well.

So the somewhat flirtatious banter started again, and then carried over into actual phone calls. It was during our first phone conversation that I learned that Jay was in the beginning stages of a fairly serious health condition. I won’t get into specifics, but it is an illness that chooses its own timetable, and definitely one that can mess with someone’s emotional well-being. While he attempted to play down the effects it had had on his life thus far, I could tell that he was questioning a lot of aspects of his future. But he was online looking for a date and possibly a relationship, right? I decided to be the dynamic individual I had always suspected myself to be and give it a shot with someone who seemed like a great person. Being a relentless dreamer, I looked into my future with Jay and imagined myself the noble wife of an ill but admirable man, wheeling him around and constantly trying to keep him comfortable while, showing a brave face to the rest of the world. I’m a hero, obviously.

There have been very few first dates where the guy has picked me up from my residence in an actual vehicle that they own (imagine that!), but Jay was one of them. So I got door-to-door service for the time and resources used on this date. That’s good considering how it went.

Strike 1: Rude, secret smoker. He said on his profile that he didn’t smoke cigarettes but his car reeked of smoke from the second I opened the door. I smoked regularly for a number of years and probably wouldn’t have judged him if he was open about being a smoker from the beginning. The pack that nearly flew out of his glove box didn’t help his cause too much either. He also complained about “not being able to get around the area” or “get an easy parking spot.” He grew up and had been living about 20 minutes away from where we were at the time for his entire life. Within the first 5 minutes in his car, I found him to be a rude liar who shouldn’t have volunteered to drive. So things were going well.

An image of Jay shortly before (and after) our date.
Source: http://www.tvgasm.com/home/amazing-race-recap-rushin-russians.html/2

Strike 2: HOLY CRAP this guy is unapologetically racist. After grumbling about not being able to find his way around anywhere, and the lack of parking spaces, we got to the restaurant (within minutes) and he parked across the street (easy peasy). We saw an older Latino man in chef whites limping slowly across the street, clearly trying to do it quickly. It was obvious that the man worked at the restaurant he had just walked out of and I immediately felt bad for him. Jay said a rude remark about the guy’s limp.

When we were sitting inside the restaurant a few minutes later, Jay brought up the guy’s limp again, laughing. I looked at him with disgust, and asked him why the Mexican guy who works in a kitchen is amusing.

He said “Oh, I thought he was regular.”

Come again? “What’s regular?” I asked. I honestly had no idea what he was talking about. Did this dude not have appropriate bowel movements? Was he not a repetitive part of Jay’s life?

“You know,” he says, then puts his fingers in air quotes, “Caucasian.”

What the hell the guy’s race had to do with his occupation, his ethnicity or the reason it was funny that he had a limp – I have no idea. But I was completely baffled and started to think I was on a date with possibly one of the most ignorant people on the planet.

Strike 3: He said this: “Any girl that goes on an online dating site is looking to get laid or get married.”

How’s that for class?

Jay offered other gems such as his new pot-smoking strategies at the apartment he just moved into. He also stated that at the time of our date, he actually did not have a job, had no idea if he would ever work again and had no plans to figure out how to go about doing anything. Again, he had some health issues and was understandably shaken, but he had described a real job on his profile, so there was something else he had covered up. He obviously needed more time to work on his marijuana routine, but one would think a paycheck would be required for that sort of thing…

Now I don’t want you to faint from surprise, but I was thinking that this definitely wasn’t the guy for me.

After a wondrous dinner and ride back to my home, I got out of his smokestack – – um — car and quickly said thank you and goodbye. If I hurried inside, I would at least catch the second half of 20/20.