Combing through the terrifying history of the dates that I have had, one theme that has come up several times is my love of food and restaurants. Namely: food and restaurants related to celebrity chefs. I use the word “celebrity” to mean that I have heard of or seen this chef on the Food Network at least a few times and get really starstruck if I see them in person.

I think the beginning of my Food Network interest was on a not-so-blind date with someone I was actually interested in several years ago. This person happened to be interested in working in the restaurant industry and shared my budding appreciation for all things Food Network. So you can imagine both of our squealing delight when Mario Batali walked into the bar we were sitting in. With a combination of sheer curiosity, the desire to recount this story hundreds of times in the future and the need to look cool in front of my date, I approached Mario. Let it be known that these were still the days where one can smoke cigarettes inside bars. Mario was participating, with a cigarette in one hand, drink in another and the proverbial layer of perspiration on his ginger brow.

“Hi Mario. I just wanted to tell you I watch your show every day and I’m a big fan,” I stated as soon as I approached him (I do believe he was wearing his trademark orange shoes as well) and his friend.

Mario’s response seemed sincere, “Oh, do you cook as well?” he asked.

“No,” I admitted with a sheepish grin, “I just like watching you.” Okay, in retrospect, I sounded like a complete stalker…but it was successful.

Mario then glances at his friend, puts his thick arm around my neck and lays a giant, moist kiss right in the middle of my forehead. Then he says, “You are the perfect woman.”

My date witnessed all of this but obviously didn’t agree with Mario’s assessment, because things between us didn’t last for long after that night.

Fast-forward a few years later…I happened to be at the same bar on a truly blind date with a man that I had met online. We were talking to each other in the outside seating area, which was fantastic since my date was not very entertaining. There wasn’t necessarily anything wrong with him but the most memorable part of our conversation was when he recounted the time he got the “opportunity” to be an extra in the “Miami Vice” movie, minute by minute. I’m pretty sure it took him about an hour to tell me every detail down to his thoughts about pursuing acting afterwards (Seriously? He played one of hundreds of dudes at a dance club in the opening scene) to Colin Farrell’s smoking habits on set. In between all of that, a glimmer of hope and beauty passed us by that made my entire year. Eric Ripert – one of the most famous chefs (not necessarily on the Food Network – but friends with many of those personalities and a feature of many, MANY foodie conversations) was walking by. And he was by himself! I don’t even think my date noticed that my jaw was on the floor as I stared to his immediate left for a good 60 seconds and started shaking. I was pretty surprised that such a well-known entity in the culinary world was navigating the streets all alone and that I was actually witnessing it. I told my date, who basically had no interest in what I was saying and continued to describe his fantasy of being the next Sonny Crockett…or whatever he was talking about. I should have ran up to Mr. Ripert and never looked back. 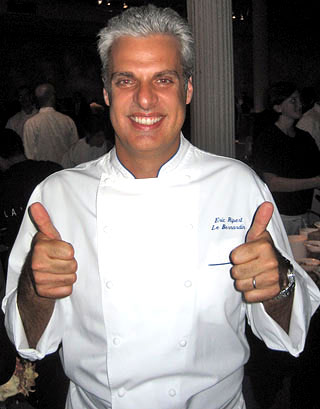 And a similar experience happened last summer, on yet another online date with someone else who claimed to be heavily involved in the culinary world. So how in the world could he not recognize Maneet Chauhan?! Truth be told, I could not remember her name and had to spend a few minutes literally right after first meeting my date to figure out the famous Food Network “Chopped” judge and restauranteur’s identity – but I knew that I knew her! I watched her closely in the bar area of the restaurant where we were seated, waiting to see or hear her complain about the “cloying sweetness” or “lack of spice mixture” in one of her appetizers, like she does on TV all the time. Oh yeah – and my date was there too, but that obviously didn’t work out. 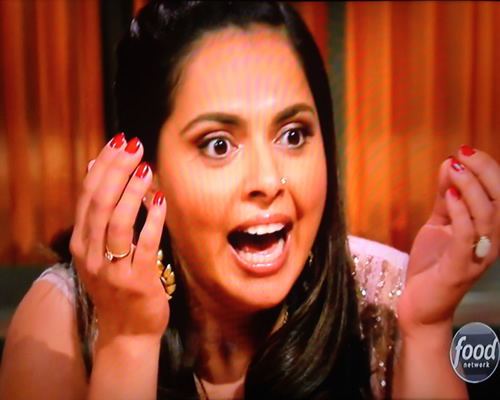 I think my true calling is to be an agent for a famous chef, don’t you? Being in the same vicinity with a culinary celebrity is more thrilling for me than any dating scenario, which is very telling. Even as I document these experiences, I watch “The Kitchen” and hope to catch a real-life glimpse of Geoffrey Zakarian’s fabulous hipster glasses.